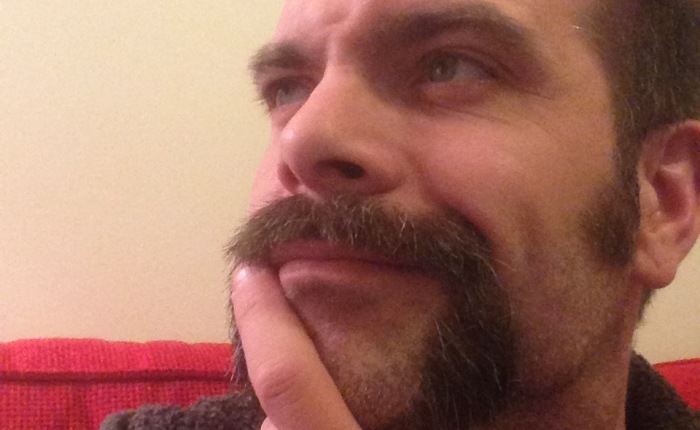 After a flurry of interest and opinions (thank you again you lovely half dozen people who read my blog), I decided that I couldn’t keep my beard, not after teasing the internet with the prospect of me shaving it off for something more interesting.

There were several differing opinions, the Downey Jr/Tony Stark look seemed to be quite in favour, but I decided that it look too groomed for me…let’s face it, Iron Man probably has a personal barber who sorts his facial hair out every day, whereas I usually have a case of I Hate Mornings Syndrome…the odds of me managing any kind of regular upkeep on a moustache/beard combo that sculpted, that defined…was never gong to happen!

The Sam Elliott got some good votes too, I’m just not enough of a manly man’s man, a gravelly voiced Silver Fox, a macho cowboy, to be able to pull that one off.

There was one vote for the Kurt Russell Hateful Eight look, and I’ve tried my best, but my lack of a mane of good, thick hair means I’m not quite pulling it off. In the end I’ve gone with something in between Kurt and Sam, I think, I reckon I’m probably more cowboy than superhero in any case, and  seriously, who has the time to groom their moustache and beard every morning?!?!? And so, for at least a week (I shall withstand any mockery I am subjected to), I am going to let this bad boy grow, and see just how awesome a moustache it can become.

My suspicion is incredibly awesome.

Ideally I will get to the point where I can plait it.

I have no doubt that I will wake up in the morning with a bad case of Beard-Shavers-Regret, but for now I am quite happy to see my chin again, while retaining enough facial fuzz to hide a multitude of sins. And sometimes food, for later. And retaining the ability to strain my coffee while drinking it.

Still, I’m going for the eccentric author bit, I’m also going to buy some leather patches to sew on the elbows of all my jackets, start smoking a pipe and referring to myself in the third person.

Speaking of being an eccentric author, don’t forget to buy/read/review my books, please, the two currently available can be found here (for fantasy lovers) and here (for those who prefer a quicker-paced action thriller set in the near future), and it really is reviews which make the difference for indy authors like myself. Don’t forget that both books can be read for free with Kindle Unlimited, so anyone with Amazon Prime, dive on in there!

That’s about it from me for tonight, no writing occurred today but I did think abut the next chapter a lot, so that counts, right? Still, I’ve done a prologue and four chapters in the last 6 days, I’ll take that. As long as I get something done tomorrow. And not the tomorrow I usually refer to, the tomorrow of unfinished DIY, but the actual tomorrow, the 24th April 2016. Trying to maintain a level of at least five chapters a week was the goal, I’ll stick to that.