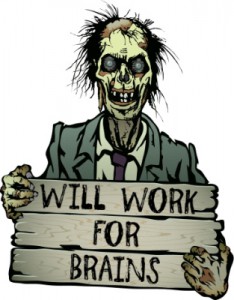 On Saturday I had the “pleasure” of attending RAM Training’s Zombie Bootcamp, near Droitwich here in the UK. Now, don’t get me wrong, I’ve only put quotation marks around the word “pleasure” as I’m pretty certain that enjoyment isn’t the main thing you’re supposed to get out of this type of activity.

My various bumps and bruises would be inclined to agree.

In spite of the pain and exhaustion, though, I can say that I thoroughly enjoyed this event. It was well run, the instructors were enthusiastic and authentically ex-military, and the zombies themselves were…well, they were large, incredibly strong men who threw me and my friends around as though we were rag dolls. Very painfully. Which, I must admit, is what we had paid for.

(It is worth pointing out at this point that at no time were we misled about the kind of damage we might be taking. We knew what we were getting ourselves into, we’re just that stupid)

I was attending this event for a friend’s stag do, and it made a nice change from the “start drinking at noon, keep drinking till we fall over, wake up realising we ended up in a strip club and spent far too much money” type of stag party. We were booked in to the evening session (assuming that doing it in the dark would be more authentically scary), and arrived on time (unusually for us) and sober (ish). We were greeted by an instructor who proceeded to verbally abuse us (again, you know what you’re signing up for, and it’s all part of the fun), especially our stag, who was in a dress and feather boa, and myself, in one of my usual Hawaiian shirts, and of course anyone who spoke up, backchatted, looked a bit funny…basically our whole group was in trouble.

After signing a form that basically said we waived our right to sue them under any circumstances, including the off chance that a real zombie apocalypse occurred while we were there and we were all turned into members of the walking dead, we trooped inside to get geared up. This was the first awesome part of the experience.

Knee pads, as used by extreme sport enthusiasts and anyone who keels down a lot – check.

Elbow guards, as used by anyone who wants to look like a bit of a tit – check.

OK, the elbow guards didn’t look massively macho, but the rest of the gear made us feel like Green Berets, even with my bright orange shirt hanging out of the bottom of my Kevlar vest…

We then had a quick briefing, followed by some Public Order training. This was where the Bootcamp part of the experience was felt most keenly, as we paraded up and down with enormous riot shields and rubber batons, learning a few drills, repeating orders back to our instructor with childish enthusiasm and volume, and then being forced to do more push ups than most of us had experienced in a loooooong time (think north of ten). There was another stag group participating on the same evening as us, and mock riots followed, the two groups taking it in turns to beat each other silly with the rubber batons.

All in all, a good introduction to the evening. A bit of fun, getting to play with actual riot gear, whacking a complete stranger on the backside with a rubber baton…what more could you ask for on a Saturday night?

Our group was then first to do an “exercise”. This involved us being kitted out once again with the riot gear, being bundled into the back of a van and driven to another part of the compound (industrial estate) where we quickly formed up in a line, as trained to do a full twenty minutes previously. Immediately there was a “casualty” to be checked, and I, in my ridiculously chosen bright shirt (might as well have had “target” tattooed on my forehead) was chosen to go and see if said fallen soldier was still breathing.

He was not. He was, of course, a zombie. One who proceeded to vomit blood all over my helmet, visor, body armour, shirt sleeves, arm, ear, jeans and shoes. Please believe me when I tell you that this blood is not that easy to clean off, especially when ignored for several hours…and in a facility where the only mirrors are the ones in the sun visor of the passenger seat of your car. (Also no showers on site, should you choose to stay over, which we did. Take baby wipes.)

After so effectively vomiting blood all over me the zombie proceeded to drag me to the ground, whereupon my friends beat the cr*p out of him with their rubber truncheons, rescuing me from the clutches of the undead…and just in time for another couple of the biggest, burliest zombies you’ll ever see to come lumbering out from behind cover to attack our little group.

They were big. They seemed angry (possibly because we were constantly hitting their legs, arms and torsos with rubber truncheons). And they were extremely strong. They genuinely did pick us up and hurl us through the air. Sometimes we landed on the conveniently placed sandbags designed to cushion our falls, sometimes we missed and landed on the inconveniently placed gravel which seemed designed only to incur maximum pain on any body part it came into contact with.

I hit the gravel. A lot.

Of course, I was being enthusiastic, and giving it my all, really getting into the spirit of the whole thing. Otherwise what’s the point? This did, though, make me something of a target. I’m not the biggest man in the world (about 5’9″ and around 12 stone), I was getting up quickly and attacking these beefy zombies again and again, and I was wearing an item of clothing that I have been told makes the word “garish” feel small and insignificant.

I forget how many times I was airborne that night, but it was a lot. And it was worth it. When the exercise came to its conclusion one of the instructors declared “not a bad effort, there, lads, especially you, Hawaiian Shirt”. I felt like Arnie, Sly and Dolph rolled into one (and if you don’t get those references, I instruct you to go and watch every 80’s action movie ever made). I was a warrior!

A short break followed, and then some mandatory training on the paintguns we would be using in our next assignment (here’s the trigger, here’s the safety, try not to shoot anyone in the face). Then it was back on the van, back to the encampment, back into action! Only this time, we had firearms…

Split into two Fire-Teams, we proceeded to clear rooms, shout gung-ho phrases and pepper the broad chests of some suspiciously similar looking zombies with paintballs (they were now equipped with goggles, though in the darkness and at the speed we were moving, this detracted in no way from the overall atmosphere). Each Fire-Team was accompanied by an instructor, who kept the whole thing moving along nicely, and occasionally threw a “grenade” (firecracker) into a room before us, adding to the illusion of being in an actual war-zone. Eventually our two teams met up, and at the end we lined up in two ranks and let rip at an oncoming horde of the undead.

Whereas in the first exercise it seemed that an almost infinite number of blows with a baton was required to down your reanimated foe, in the second (and in my opinion far more fun) exercise the walking dead went down after three or four hits in the chest. This made the whole thing more satisfying for me, and I think a very sensible way round to order the activities. The zombies beat the living hell out of you in the first round, and in the second you get to shoot at them at close range with paintball guns. Fair enough.

Finally, having survived our experience, we retired to the bar, where one of our instructors was doubling as a barman, along with a much more attractive barmaid (no offense to our instructor, of course, fine figure of  man but not my type), and we drank for a few hours while reliving our evening. And playing beer pong. And eating pizza and kebabs from a local takeaway. And occasionally groaning with pain.

The sleeping arrangements were zombie-apocalypse chic, bunkbeds in a dormitory, very much bring-your-own-sleeping-bag-and-pillow-and-anything-else-you-think-might-make-you-more-comfortable, but as we didn’t stop drinking till nearly three and breakfast was at eight, it wasn’t like we spent long in the beds anyway.

Speaking of breakfast, it was served at a nearby café, and was everything you could ask for in a full English. Hearty, well-cooked, and served with a mug of tea.

All in all I had an excellent time, even if I could barely move my left shoulder for the following two days, though this is not something I would recommend for the faint of heart (two members of the other stag party had to sit out the second activity, I believe) or the ridiculously unfit. I was shattered by the end of the first exercise, which was pretty physically demanding, and I’m not in bad shape. Not great shape, but not bad.

The instructors were entertaining, just abusive enough, but friendly when all was said and done, the zombies were suitably terrifying and violent, but also restrained (they could easily have crushed me like a grape if they’d wanted to) and the whole thing was a great experience.

Pros – the equipment was authentic and top notch, the action was physical enough to feel real without being overly dangerous (minor bumps and bruises occurred, obviously, but at no point did I feel in actual danger), the staff were all great in their respective roles.

Cons – I’m still feeling the bruises 5 days later…definitely not for the fragile. Could have done with some real ale in the bar.

Overall I would recommend this to anyone who wants something a bit different as an experience, especially fans of zombie horror. And only if you can take your sense of humour with you.